General awareness of the aphorism of the closeness of technology (the high attention cost demanded by digital experiences) has reached a high watermark in the past 12 months, with government institutions, NGOs, technology companies, education institutions and more voicing concern that digital technologies demand increasing amounts of human attention than is reasonable. The reasons for the scramble for human attention are various and range from the need to grow user bases, satisfying platform rating systems, the need for social proof; the list could go on.

The popular response to the attention/technology nexus has been the growth in popularity of the digital detox movement, a natural knee-jerk reaction to the over-encroachment of technology by either banishing it for an extended period of time, or creating conscious spaces between human life and digital mediation.

Objectively both scenarios appear to be on the outermost rung of the digitisation spectrum, and neither is a satisfactory long-term solution to the ongoing development of modern life going forward. Further development of more innovative digital systems is ultimately required that minimise disruption or overwhelm of human attention. Indeed, a growing ecosystem of companies and individuals is developing socio-technical solutions to solve this issue. Socio-technical solutions make sense because while technology is not going away and the complaints increase as to the impact of technology, understanding that future technology solutions will enter people’s lives at the right place and at the right time strikes common ground between the competing ideologies. The problem with this is that until very recently, it has been extremely difficult to create systems that can be exactly where people need them, when they need them.

With the introduction of emerging technologies such as advanced sensors, machine learning, data science and innovative human/brain-computer interaction, we are at the beginnings of technologies and applications that are beginning to understand what it is to be human.

The increasing sophistication of context aware computing – services that maintain an ambient awareness of a person’s relationship to their environment and adapt appropriately – are significant and point to a future where digital detoxes will be a less necessary response to technological overburden because increasing personalisation will render them less necessary.

One need only imagine a shopping experience where the right offers are displayed in a way that matches individual shopper personality, their propensity for advertising, and their emotional state at that moment in time. Or a health experience that mediates all-hours access to medical expertise, is sensitive to the needs of a patient, alert to their current needs, and anticipatory of the way people are likely to feel when dealing with their particular ailment.

mHealth company Ginger.io is a good example of this, a health app that collects passive data (movement, GPS, social media commentary) and active data (surveys and check-ins) to obtain an accurate reading of a person’s mental health at a given moment. With information like this, the app can identify whether someone has been sedentary for an extended period of time for example and may exhibit depression-like tendencies before notifying either the owner or a confidant who can then reach out to emergency services.

For the marketing and advertising communities, context aware computing is not a new concept, the use of cookies and behavioural tracking technologies to monitor the ways people move online has been widespread since the mid-90s. However, discussions about behavioural tracking have been allied with feelings of unease as people have been unwittingly tracked and their behaviour monetised for revenue. The argument that behavioural tracking technologies are important to provide relevant content has been levied, but when people are tracked without their knowledge or consent, and at times delivered content without having physically searched for it, the understandable concern is that increasing amounts of personal data are required to serve the needs of advertisers leads to unacceptable personal encroachment.

The pressure from supranational and national organisations to curb context aware and behavioural tracking technologies has been considerable, in addition to efforts from NGOs, quangos and think tanks. Global attempts to stymie the reach of behavioural tracking has been far-reaching but it is unclear whether it has been effective. If people feel as though their every move is surveilled, it is fairly certain that  it will lead to bad user experiences and people would be far less likely to engage with ads.

This reveals two important things. Context-aware computing is extremely powerful and useful when the contract between people and the advertisers is clear and consensual, and that digital experiences can be useful when they are meaningful enough to enter our lives. 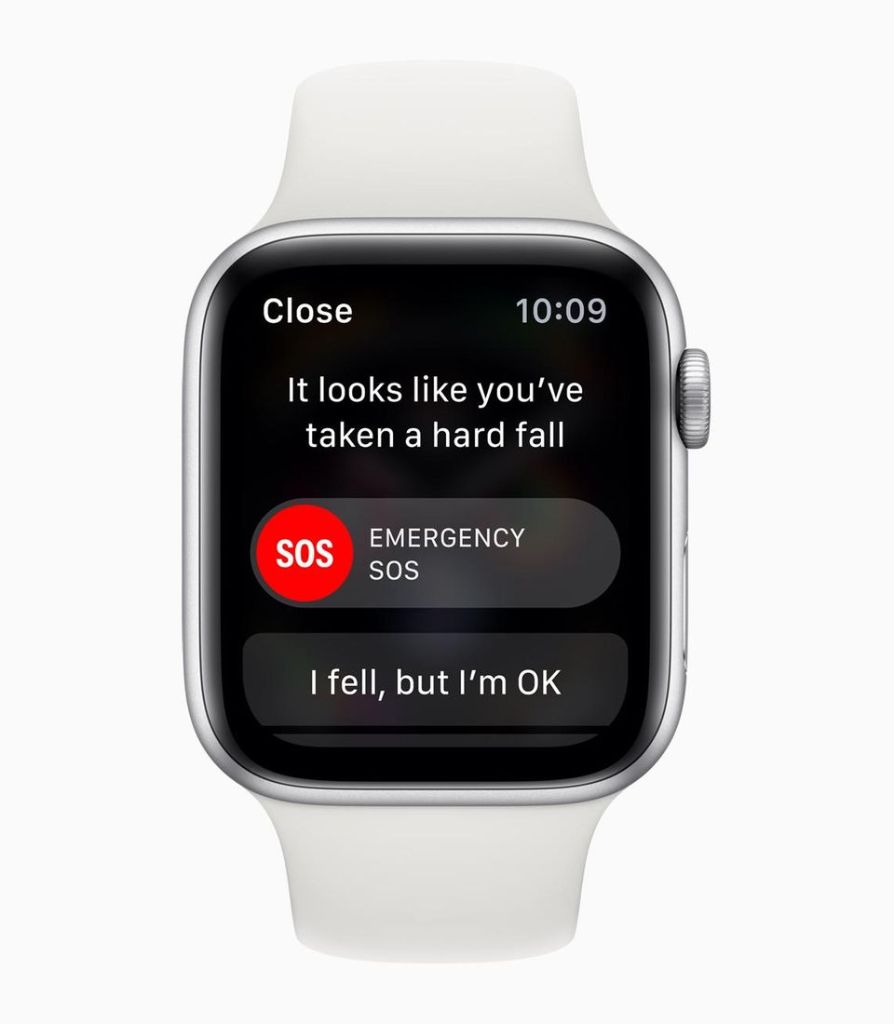 Context Aware: The Apple Watch senses when you've had a fall and offers to notify emergency services.

The automatic identification of meaningful or value-driven behaviours is a useful framework of placing the digitised world exactly where people want it, at the right time. This type of computing, analogous to context aware computing, identifies the artefacts we place most value in and provides information, products and services which associate with this. This has been popularised in the prioritisation of meaningful connections on Facebook platforms.  This is important because identifying who and what is most valuable to people and providing products and services in line with this means results in a more engaged captive audience, which in turn, provides richer data, and is far more useful to advertisers.

Another development in intelligent emotional space between stimulus and response is the removal of the ‘Like’ button on Facebook. While it remains to be seen whether it will have the desired effect of lowering the focus on vanity metrics the move, which is intended to surface higher quality content over content that simply has a lot of likes, is an interesting one which will be a contributor to far calmer marketing.

Unique values-based engagement is a complex engineering challenge. However, if this can be surmounted, then it is an extremely useful way of meeting people where they are and creating intelligent space between them and the computer.

The introduction of voice technology and in particular, smart assistants has been an impactful development. This field holds promise because, as the name suggests, the absence of the screen does much to render the computer interface invisible, and by implication requires less of our conscious attention to engage with it. The potential applications of voice technology are considerable, particularly when we consider how they’ve been used in mental health treatment, recruitment, therapy, and more.

However, the same challenges to widespread adoption exist as an always-on voice recorder monitoring all conversations potentially scuppers the notion that it can create intelligent space. However, the potential applications in 24/7 access to mental health treatment, safer driving experiences and more can do much to improve the integration of computing that requires less conscious attention.

Neural or brain interface technologies have been available since the 1960s with technologies such as cochlear implants. Neural interfaces have evolved to the stage where treatments for patients with parkinson’s disease and experimental treatments for people with spinal cord injuries have been developed and applied in real-world contexts. Neurotech is one element of Mark Weiser’s vision of ubiquitous computing, where the computer would fade into the background and require increasingly less human attention.

The modern day miniturisation of neurotech solutions is almost at the point where it can feasibly be used to improve brain performance. Companies producing this kind of technology such as Neuralink, Kernel and Dreem would enable us to use our thoughts for things such as remote surgery, gaming, and even sensory experiences.

The last, and potentially most impactful way intelligent space is being created is in the OS-level interventions. Apple’s Screen Time, and Google’s Digital Wellbeing are mainstream examples of the changes made by technology companies to improve digital wellbeing. These changes are important because they are implemented at the OS level and are therefore deployed to billions of people instantly as part of the core computing experience. These developments are also extensions to other screen time management apps that have long been in operation such as RescueTime, Siempo and Freedom.

Other OS changes are being introduced to help lighten the load on human attention such as Dark Mode on both iOS and Android, which again follow the work of other screen temperature management software such as f.lux. Gesture controls in smartphones such as ZenMode in OnePlus phones, and Android’s flip-to-mute are signals that the move to lessening the impact of computing on human attention is underway.

Ultimately, there are trade offs in balancing human interactions with technology. In order to facilitate intelligent space and ease the feelings of overbearance in our lives, it appears that for now, computers will have to know more about us and our personal information as we navigate the world. This trade off is tricky to navigate as there are social, regulatory, ethical and technical challenges to overcome before this can be realised.

These are challenges that will need to be surmounted, not least because, in the same way that our digital data can be tracked and monetised, so too can the data and actions of technology companies and creators. Digital creators (hardware, software, and content) are ultimately responsible for what they create both morally, socially and fiscally, and increasingly legally. It is now easier than ever to identify when companies utilise duplicitous means to capture people’s attention, keep them in loops they did not opt in to and behave in ways they wouldn’t ordinarily. Creators have a clear responsibility and obligation to serve the overall wellbeing of its users and if this doesn’t happen, then the first class action lawsuits from people who can prove with digital-level precision that certain technologies were designed to misdirect or cause harm. This corporate digital responsibility, in a similar vein to corporate social responsibility, is a role that will grow in importance in organisations in the not-too-distant future and will require a combination of skill sets from the professionals that bear the titles.